Integrating a variable over a line, and returning nodewise value 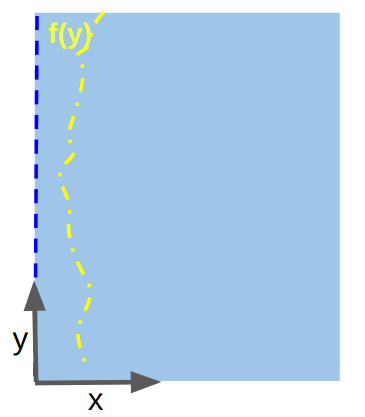 Any thoughts on how can I solve this problem?

I am sorry, but I do not understand your problem,

Thanks so much for your answer; Your understanding is correct. But:
\psi(y)=\int_0^y f(y)dy . where f(y) is indeed a data nodes [There is not a explicit relation to integrate and f(y) comes out of iteration on data]

What I think I need to do is:

As we can see I need to calculate the a cumulative integral for each node,

The only integration in FreeFEM is int1D which returns the integral one whole boundary i.e.
\int_0^L f(y)dy, and returns one number as result.
I am wondering how can I calculate a cumulative integral (i.e. \int_0^y for each point, y \in [0, L], which returns results for all nodes)

You problem is not correct because, if \nabla\phi=0 then \phi is a constant, so f on border must be constant.

Thanks so much for your response;
As I said an equation like \nabla \psi =0, not exactly this one;

However I don’t know if there is any function defined in FreeFEM to calculate a cumulative integral, i.e., F(y)=\int_0^yf(y)dy~~~y \in [0,L]? The only function that I found is int1D which returns F(L)=\int_0^Lf(y)dy

A way to compute a cumulative integral here alpha , and you can use directly alpha as a BC on on